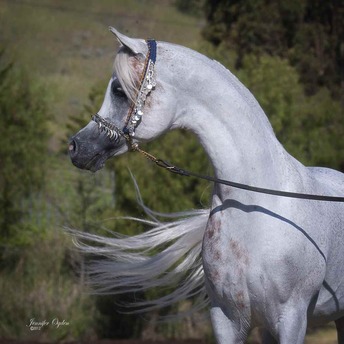 WH Justice was born in the USA in 1999,  he is a son of Magnum Psyche out of  the El Shaklan granddaughter Vona Sher Renea and was bred by Wendell Hansen. From the moment he set foot in Europe WH Justice charmed everyone who saw him, with his uniquely low eye set, beautifully carried, long, fine neck, flag like tail carriage and graceful movement.  Early to go white, he was recognizable as an Arabian colt of the highest quality from the furthest point of any showground, and people always flocked to see him up close. Up close his charm works even better and his fan club has grown with his every public appearance. At his most recent performance, at twelve years old in Aachen 2011 he was rewarded with the coveted All Nations Cup Champion Stallion title, to deafening cheers of delight from the entire audience. It was a joy to see him.

However there are many Arabians who are magical in the flesh, but the question is, can they reproduce it? I think we can safely say after eight years of foals that WH Justice has rewarded the faith of many, many breeders. It would not be an exaggeration to say that he has moved the goal posts in terms of Arabian type, in a way that his great grand sire El Shaklan did, thirty years ago. From his first foal crop came the 2011 US National Champion Mare Panarea by Palawan, and, as they say, the rest is history. The WH Justice look is remarkably easy to recognize, if you see a horse in the collecting ring who catches your heart with their charming face, silvery elegance and playful charisma,  you can bet that you know who the sire is….

In early 2012 Aljassimya Farm negotiated the lease of this legend and decided to open a new chapter in his life, by sending him to stand for one year at Om el Arab International.  Many of his champions already carry the blood of this world famous farm on their dam's side: World Champion Aja Justified, All Nations Cup Champion Shanghai EA, All Nations Cup Reserve Champion Abha Opalina.  The whole world will be watching the results.

Beautifully written by Emma Maxwell, in 2011.